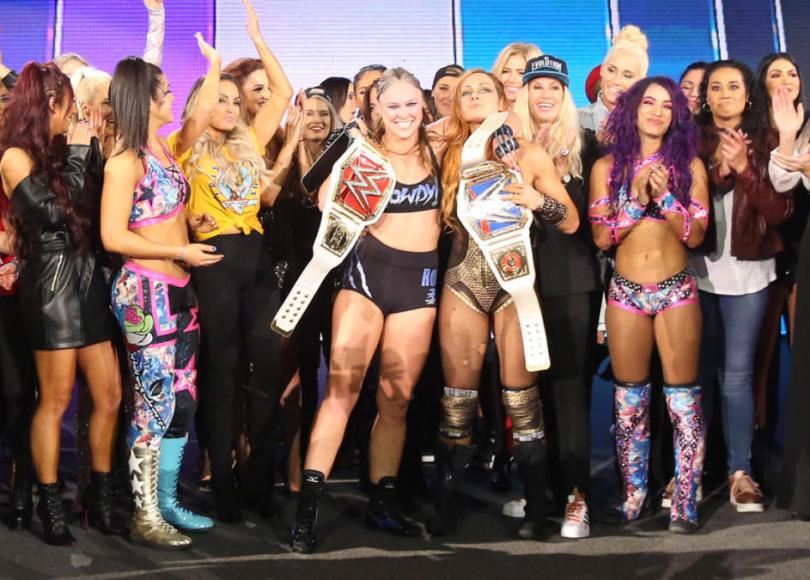 The reason behind the lack of an Evolution PPV in 2019 didn’t stem from poor ticket sales or magnitude of interest. It was due to a busier than usual schedule and the fact that several top female wrestlers were missing from the roster – namely Ronda Rousey, Sasha Banks and Nia Jax. While it remains to be seen if Ronda will return to WWE in the future, or if Charlotte Flair and Becky Lynch can carry the women’s division on their shoulders, there is a way for producers in the company to secure a second Evolution PPV while capturing the interests of several generations of wrestling viewers. It’s simple – make the next Evolution a giant feud, like Survivor Series, only it’s between eras of women’s wrestling and not television brands.

Athletes who can still compete would be broken up into three categories – Legends, Divas and Superstars. Participants in each category would represent a pivotal time in women’s wrestling. Legends – when the women started to push on the mainstream borders and had some pretty gnarly and risque matches. Divas – when the women started becoming high fliers and even bigger risk takers. Superstars – when the women started main event-ing huge events and started outperforming some of the men. WWE reunion specials are always a big audience draw, so imagine the impact of seeing some of the greatest women in wrestling all competing in one ring? It would be monumental, to say the least. Here’s some of my ideas for participating athletes:

Making the next Evolution PPV an eras feud results in a number of creative matches. There could be unfinished business matches, where superstars of the past get back in the ring to fight out their differences. There could be legend versus superstar matches, much like how we got Trish Status versus Charlotte Flair; and hey, we were promised Trish Status versus Alexa Bliss, too. There could be tag matches and battle royals and so much more. Of course, some of the older wrestlers aren’t as skilled in the ring as the current WWE stable, but I’m sure they could pull off some stellar matches with the right partner in place. Using women from the 1990’s to the present era would truly be the culmination of an evolution. Even without the power of Ronda Rousey, I think doing the next Evolution PPV this way would be a huge draw.

We’ve seen how well Survivor Series does. Could Evolution be next?